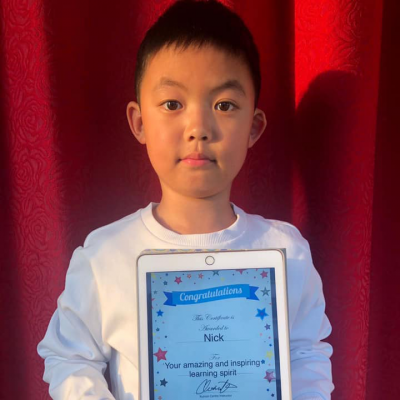 Nick continues to learn through any situation

In December 2019, Nick, a Year 4 student, departed on a family holiday to China. Nick’s family trip was originally for two months. But as the COVID-19 crisis escalated, Nick and his family found themselves unable to return home.

“Kumon has helped me a lot, such as doing fractions in maths and learning English words and sentences”, Nick says.

“For me, it is important to keep learning and to maintain my study habit.”

Originally, Nick and his family arranged with his Kumon Instructor to bring two months of worksheets with them to China. After completing all these worksheets, Nick asked his auntie in Melbourne to get additional worksheets from Nick’s Kumon Instructor, and send them to him.

Nick then hand copies the photo of the worksheet onto a blank piece of paper and gets on with his study.

“Nick is independent, strong and self-disciplined”, says Nick’s dad. “He is strict with himself, keen to progress and doesn’t like to fall behind.”

“This is all due to the good study habit built up in his previous study.”

Nick’s dad also says that a supportive learning environment at home is conducive for his son’s progress.

“Nick has a quiet study environment at home; we are always there for him”, explains Nick’s dad. “We communicate with his Kumon Instructor proactively and prepare all resources for Nick. Whenever Nick encounters difficulties we are there to help.”

At the time of writing, Nick is three years ahead of his school grade level in Kumon Maths and two years ahead in Kumon English. He is a long-term Kumon student, having been enrolled for two years already. At the early stages of his Kumon study, he received greater hands-on support from his Kumon Instructor to build his independent and self-learning ability.

But as Nick progressed through the worksheets, he became more independent and consistent in his study, though he still participates in regular video sessions with his Kumon Instructor.

“My assistants and I always make ourselves available via Zoom and WhatsApp to support Nick and his family”, says Gloria, his Kumon Instructor.

“This has supported Nick to keep learning and to continue to make progress.”

Kumon is a home-based, pencil and paper programme students can study, at home, every day on their own. For more information on Kumon’s home-based programmes, please contact your nearest Kumon centre. Operations will vary from centre-to-centre during this period.